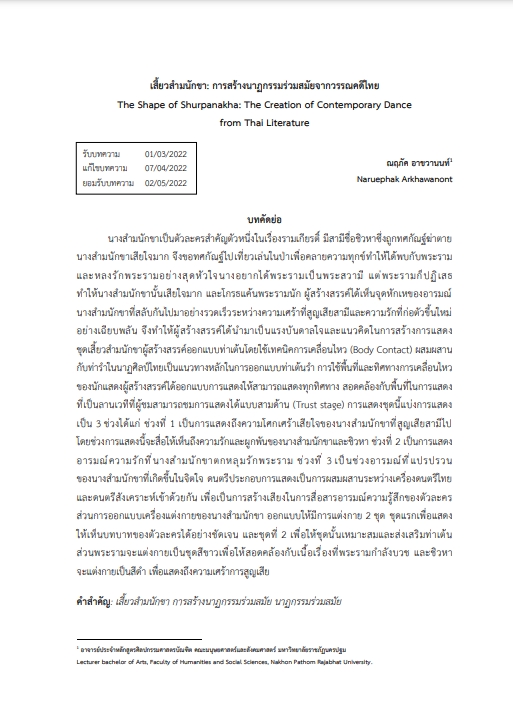 An important character in the Ramayana epic, Shurpanakha was wed to Vidyutjiva, who was killed by Ravana. In order to alleviate her grief, Shurpanakha excused herself to the woods. There she met Rama, with whom she became besotted, and she pleaded with him to marry her.  When he refused, Shurpanakha became crestfallen and vindictive. The fast-changing, tumultuous emotions of the character have inspired the author to develop a performance entitled The Shapes of Shurpanakha. The choreography is designed principally based on an integration of the body contact style and Thai dance, and the performance is created for the exhaustive use of space and directions of movement and is well suited for the thrust stage. There are three acts in the show. The first act depicts Shurpanakha’s sorrows concerning the loss of her consort; this act expresses the love and bond between Shurpanakha and Vidyutjiva. The second act portrays infatuation—the moment when Shurpanakha falls in love with Rama. Her shifting emotions are then manifested in the third act. The music is performed with Thai musical instruments, combined with electronic music in order to help convey the feelings and emotions of the characters. There are two costumes for Shurpanakha that show her varying states of mind. Rama is clad in white for his forthcoming ordination in the story, while Vidyutjiva is dressed in black, depicting misery and loss.

This work is licensed under a Creative Commons Attribution-NonCommercial-NoDerivatives 4.0 International License. 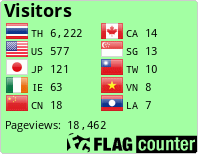